There’s a new Netflix series called “OA.”  It’s about a young Russian girl who drowns, has a Near Death Experience (NDE), and lives.  The show’s premise is that people who have experienced NDEs are different– and they definitely are.  Death loses its fear-factor.

I should know because when I was 19, I died and then “got pulled back” into my body, much to my chagrin.  I wasn’t a happy camper at the time.  That NDE changed my perception and my own perspective on life completely.

If you’re interested in reading more, please check out my book, “Love From Both Sides,” which is on my website.  Here are 4 Free Chapters to read or you can visit my website dedicated to the book (lovefrombothsides.com)…

Among many other things, my book also tells the story of my husband’s coming back and connecting to me “intimately, physically, lovingly,” and then reincarnating into his next lifetime.

Love is an energy force with many expressions.  Romantic physical love is only a part of that love energy, and yet, because romantic love can be expressed through our bodies, and create all kinds of chemical responses, it gets the most air-play.  Humans need love.  We all love loving and we all love being loved.  When a lover dies, and a partner is left behind, the feelings of grief can be so powerful that sometimes the partner dies too.  Or at least wants to die.  In ancient India, wives of dead husbands were forced to climb onto the funeral pyre and be cremated along with their husbands. 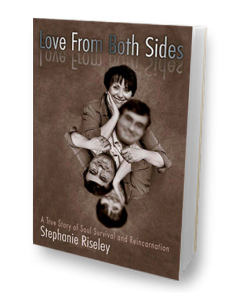 Since Love From Both Sides got published, I’ve had countess widows contact me from all over the world, telling me about how a lover “came back” and made love to them from In Between, which is exactly what happened to me and to a beautiful woman named Kathy.

A few years ago, Kathy, a middle-school teacher, lost Jason, the love of her life.  Jason was only 34 when he died, but he “came back,” and connected with her energetically, loving her, giving her multiple organisms.  That was great, but it made her feel crazy.

Jason, who was a mechanic, decided to change the oil on his own VW camper.  He was in a hurry, so he whipped out his trusty old jack, and because he was in a rush, he didn’t use a back-up jack.

The jack failed, and the VW landed on Jason’s chest, and killed him instantly.

Shocked, bereft, and devastated, Kathy thought she was losing her mind, because Jason immediately began to connect with her.  She could feel him making love to her when she slept at night, and she loved the feeling.  But even though it comforted her in her grief, it made her feel extremely uneasy.

She wanted to know how she and Jason were connected, so she came to me to do a series of Past Life Regressions.

In first her first regression, she saw herself as an Indian woman, living in British occupied India, perhaps in the late 1800s.

Kathy said, “He’s on my back.  I’m carrying him.  He’s my son.”  In that lifetime, she loved him so much, so when he got older, she wanted the best education she could get for her son.

“Next important experience,” I said.

Kathy saw herself waving good-bye to him as he sailed off to England to get an education.  But she never saw her son again.

Kathy saw another lifetime, where once again, she and Jason were connected, only this time as father and son.  She was the father, and her son Jason died young.

Both those incarnations gave Kathy the “knowingness” that Jason was her “teacher.”  A soul teacher, and that she needed to learn to let go.

She also realized that in this lifetime, Jason only incarnated to teach her how to love.  And that once she learned how to love him, Jason needed to leave.  It broke her heart, but not her spirit.

Now Kathy feels at peace with his death, because she knows that even though his body died, their love can never die.  His love will always be with her.  Kathy went on to help other people who’ve lost loved ones heal from the grief they feel.  She teaches workshops on grieving.

Reincarnation is not just a Hindu belief.  It’s a belief shared by most humans on this planet, in one form or another.
If you want to find out how you’re connected to a lover, friend or a parent, just give me a call.

Wishing you a love-filled year!

Want to Be Happy? Appreciate What You Have