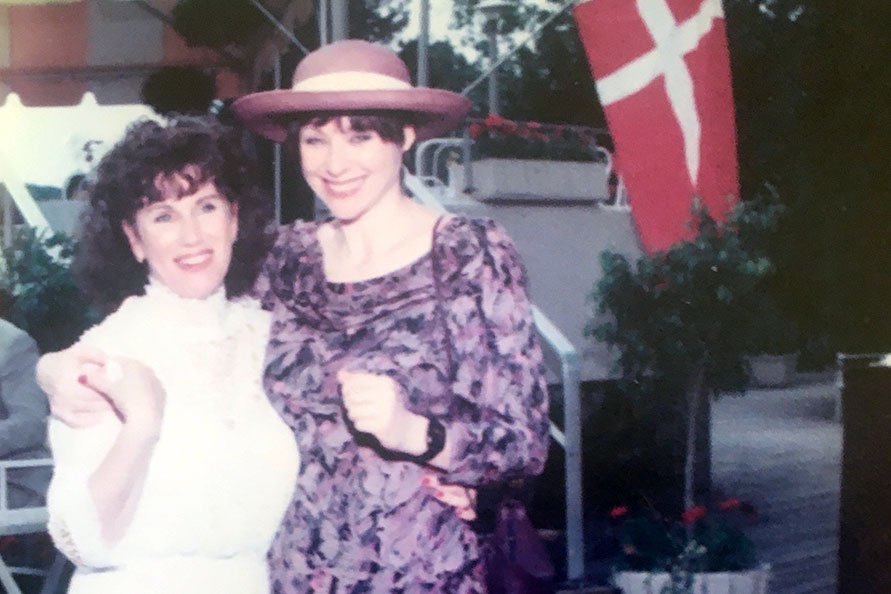 Calm Over Chaos, & Compassion Over “Being Right”

You don’t make new friends – you just recognize old soul mates – or people from your own “Soul Group.” Forty years ago, my dear friend Nancy (pictured with me at her wedding in 1989) walked up to me at the Paris Health Club in New York City and said, “I know you!”  (A very young Bruce Willis worked as a trainer there, just to name drop!)

Nancy didn’t know me, but she recognized me as an old “soul mate.”  Nancy died in mid-March, leaving her husband Rudy, now 82, to grieve in this challenging time.  Rudy is not alone in losing a loved one.  In the US, more than 180,000 souls have gone to the “In Between” during the Pandemic.

On top of the Pandemic, we’re watching as black men get shot in the back, a young hate-filled teen kills protestors, and things are just not comfy.  It feels as if whatever can go wrong is going wildly wrong.  But, please don’t panic!  It won’t help you.

Instead, use your own mind to calm yourself down.

How?  Cognitive Behavior Modification, Awareness-Mindful Therapy, and Past-Life Regression can help you get back to feeling grounded.

Awareness Therapy teaches you to be aware of your own thoughts so that you can create inner peace.

Right now?  Why not take a deep breath, then count backwards from 15 to one, while you ask your toes if they are okay this fifteen seconds?   If they are okay, then you can create a sense of calmness in your own body.  That’s a brain exercise from my Inner Child MP3 that my clients get in session two.  Another quote you might recognize from the MP3 is: “Choose your own energy over the need to right.  The need to be right is for narcissists and kids.  And you’re neither.”

We are all stressed out right now, right?  Mostly because we are bombarded daily with gut-wrenching images brought to us by TV, Internet, and Social Media.  Unfortunately, we still have the exact same nervous systems and brains that our cave-dwelling ancestors had 100,000 years ago.

So our eyes-balls tell our bodies that we are under attack, that we are in danger of being infected with COVID 19, incubated, or attacked.  And then our nervous systems go haywire, because “like thoughts link together – like nerve cells fire together.”  That’s neuroscience – it’s provable.

What can you do?  Breathe, stay calm, but stay informed.  Don’t let yourself be manipulated by fear and hatred.  Choose hope over hate.  Be aware of where you get your information, and get your news from reputable sources.  Fact check!

Once upon a time, a long time ago, everyone in these United States (not Red or Blue States) turned on the same trusted news anchors.  Everyone watched veteran reporters like Walter Cronkite on CBS deliver the nightly news.  I remember the day when he broke down on camera, announcing that Kennedy had died.  NBC had Huntley & Brinkley, ABC had Peter Jennings.  I even remember Edward R. Murrow with a burning cigarette within reach.

That was long ago when the “News” was meant to inform, not entertain – and more importantly, the network news divisions were independent and not expected to make a profit.

Now, of course, every news outlet runs for-profit and wants your eyeballs, so they can sell you a car, a mattress, or some drug you don’t need.  Facebook, Twitter, Instagram, and Google are jam-packed with wrong information. My stepson worked at the higher levels of Google, and said, “The people at Google are really nice, but Google itself becomes evil.  It intentionally leads people down to Alex Jones and his flat earth conspiracy crazies.”

For instance, I was talking to a lovely woman, and she said, “Oh, Bill Gates created the virus and wants to put chips in your head.”  I didn’t say anything, but I went to Snopes to fact check.

https://www.snopes.com/collections/coronavirus-gates-foundation/  It wasn’t true.  But she believes it.  And that’s fine, and I didn’t argue.

People believe what they want and what fits into their idea of the world.  During the last election, one of my clients, a millionaire’s ex-wife, said, “How can be for Hillary?  She’s running a prostitution ring out of a pizza parlor!”  My eyes opened wide, and I said, “You don’t say?” She’d gotten that tidbit from Tucker Carlson on Fox News.  Fact check, but don’t argue. It’s like trying to teach a pig to sing.  It annoys the pig, and it wastes your time.

When someone looked directly into my eyes and said, “Trump is the greatest president of all times,” I just smiled and said, “You don’t say.  Really?”  On Monday, my nice Haitian stove fixer said, “God created the world in seven days, and it’s only 4000 years old.  The Bible says that I knew it’s true.”

“That’s interesting,” I said, not needing to contradict him or confuse him with science. He’s entitled to that belief, no matter how misinformed it is.  He’s a sweet man, and there was no need to argue.  Instead, I chose to have compassion for his lack of education.   He’s not an astrophysicist, nor does he need to be.  He knows how to fix a 1948 Gaffer & Statler Stove, and that’s all I needed.

We all have to get through October and November.  I hope that November will bring change in leadership, and we can get people in office who know how our government works.  Who believe in the balance of powers and the rule of law.   But mostly, we need someone with compassion and honesty.

Don’t let yourself be manipulated by hatred and fear.  Choose hope over hate.  Choose calm over chaos—compassion over the need to be right.  But stay informed, stay involved, and stand up to lies. Liars lie because they want to scare and manipulate you.  In brain terms?  When you’re afraid, you lose 40% of your own brain’s ability to function.

Hitler used the same fear tactics that Trump uses to get his flipped out followers to kill their Jewish neighbors.  In my direct past life in Germany, where I knew my dear friend Nancy, I was one of those Jewish neighbors.  And I wound up dying in Auschwitz just because I was a Jew.

What can you do?  Instead of asking, “What would make me happy?  Ask, “How can I serve?”  Find ways to do good deeds.  For me?  I drive out to Malibu and have dinner with Rudy, and I listen as he talks about the love his life – my funny, fierce Warrior Goddess friend, Nancy.  What a great ride she had!  As a 25-year-old, she marched with Martin Luther King in the Civil Rights March on Washington, 50 years ago!   And I know she died thankful and proud.

Sorry, this blog is long, but to quote George Bernard Shaw: “If I had more time, it would have been shorter!”